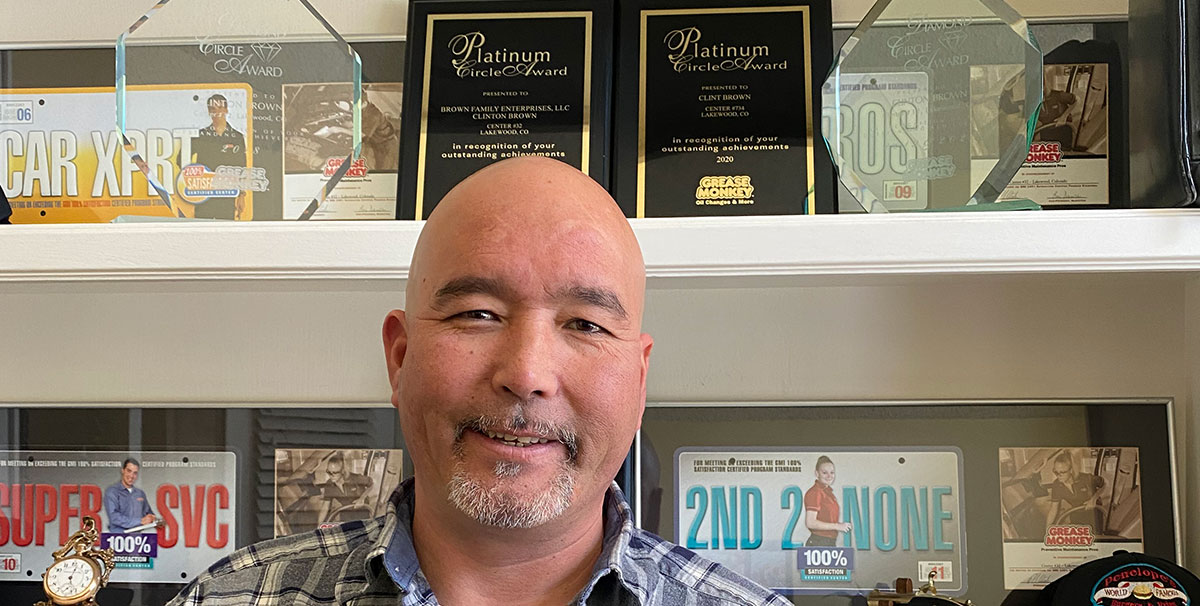 Denver native Clinton Brown started his career with Grease Monkey® as a high school student, working part time. Now a Grease Monkey franchise owner, Clinton has two stores in Lakewood, Colorado, which are some of the finest in our system.

The path to ownership

Clinton became a manager at age 19 and worked for several franchisees before becoming a Grease Monkey franchise owner. “Availability is what prompted me,” he says. “I had another franchisee reach out who was ready to sell. We’d been talking back and forth. I’m a gearhead,” he continues.

“My first car was a ‘79 Camaro Z28. I decided I’d rather work for myself than anyone else. When I bought my second unit in 2019, I inherited Bradley Sawyer, who is now my general manager. He went to Lakewood High School and has developed relationships with the clientele over the years.”

Cllinton believes that the Pit Crew Certification Program is one of the most valuable tools in the system. “Franchisees who use that program are going to enjoy significant benefits. It’s like McDonalds — the fries have to taste the same everywhere.”

“It raises the bar of professionalism to where you don’t have a job — you have a career. The biggest goal when hiring entry-level people is to get them to see it as a career. It benefits the franchisee, the employee, and the organization all the way around. It’s important to get all employees to see beyond two bays and an oil change.”

Another piece of the puzzle is following the Grease Monkey business model, he says. You’ll succeed if you follow the formula that the franchisor has developed. If you don’t want to follow the formula, performance suffers.

Lastly, a Grease Monkey franchise owner needs to be flexible. Clinton says that sometimes you must wear multiple hats: Manager, hood tech, or janitor. “It’s a blessing to be able to do (all of) the jobs, but a curse because sometimes you have to do them,” he says, laughing.

Businesses aren’t immune from setbacks — owning a business can be challenging. Clinton says he had culture issues when he bought his second unit.

“The employees didn’t want to follow the formula. Within the first couple of months, everybody was gone except for Bradley. Fortunately, I have a strong background, and I didn’t lose any money.”

Clinton says he’d like to continue growing his two units. “Our company was probably up 30% to 40% in 2021. At my second location, we had a 50% increase in business during COVID.”

And on a personal note, he adds, “I recently purchased a ‘74 Torino G2. I’m going to pull the motor out and restore it.”

To find out more about Grease Monkey and our available franchise opportunities, fill out the form on this page to download our free franchise report.